Replacing 1000w Metal Halide parking fixture has go to be one of the most subjective statements made by any LED Lighting Company.   Virtually everywhere you turn there is someone claiming to have a suitable, “most affordable” replacement.  Yet all too often clients are let down by poor performance, less than adequate lighting, resulting in less than optimal foot candles on the property.   However that doesn’t have to happen to you!   Synergy lighting is proud to release the all new Omega F2 1000w LED Replacement fixture that guarantees to replace your 1000w Metal Halides with nothing less than pure satisfaction!  In Fact our Omega F2 is so bright, it will replace (2) of your 1000w Metal Halides with ease, while cutting the number of required fixtures in half!

What It Takes To Replace 1000W Metal Halide with LED

1000W Metal Halide typically produces over 100,000 lumens in the fixture, but fails miserably at delivering those lumens to the ground. This is called light loss factor, combined with natural dimming as the lamp gets older (lumen depreciation). In fact 1000w Metal Halide typically loses 40% of its brightness in the first 6 months of operation. Therefore, many manufacturers try to take advantage of this lumen deficiency to offer an LED Fixture that will be equal to the dim, or old worn out 1000w Metal Halides. They claim this is an “Equal” coming in at around 23,000 delivered lumens, which it technically is and equal, if you really want to light your parking lot to only 60% of the originally designed light levels. 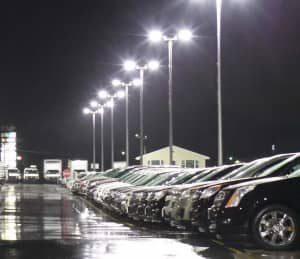 The Omega F2 delivers brilliant 5000K Pure White Light exactly where you need it! With over 14 different distribution patterns, Synergy Lighting can layout and design the optimal lighting design for any parking lot to maximize on energy efficiency while delivering excellent foot candles, and superior uniformity across the space. The Omega F2 Features a cast aluminum light weight frame that incorporates billet aluminum heat sinks to thermally manage heat loads across the LED board. Precision cut optics deliver a wide variety of optical enhancements and distributions. Each LED board is IP66 Wet Location Rated, and sealed, then covered with a marine grade stainless steel bezel. The Omega F2 is full adjustable for optimizing tilt angles for floods, or mounts horizontally for area light applications. CREE XML LED Chips deliver perfect and consistant color quality from fixture to fixture, while being driven by Philips Xitanium LED Drivers.
At 100,000 Hours Rated life (L70), the Omega F2 will eliminate maintenance and deliver beautiful consistent light for up to 20 years when used 12 hours per night. Because the Omega F2 LED Fixture is over engineered to withstand the harshest of outdoor environments, it comes complete with a 10 Year Factory Warranty and guaranteed to be free from factory defects. On Board you will find major brand components you expect in a specification grade fixture such as Wago terminals, and 10k Surge Suppression to protect against transient power spikes and surges.

Synergy Electric and Light proudly serves the Sarasota, Bradenton, Lakewood Ranch, Venice and all surrounding areas. Our certified and licensed electricians are ready to service your electrical service and lighting needs! We offer same day service as well as 24 hour emergency service to residential and commercial customers. Call us today and save big on your electrical needs! 941-756-4844